Il Mercante in Fiera Calabrese is a storyteller working through images, sociable and always hungry for beauty. Because its own nature, a lively and dynamic territorial Series cannot and must not be considered definitive. This section hosts illustrations related to subjects currently out of selection because it would be impossible and self-limiting to summarize in a group of only forty titles the wonders of an inimitable world piece! 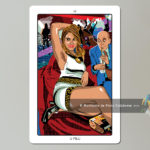 18bis. U PILU (Female Beauty)
Female body hairs have always exerted a mysterious fascination over the male universe. Hairy woman, virtuous woman as well as Moustached woman always attractive are proverbs synthesizing that old vision considering the natural woman, ’cause not corrupted by the narcissism of wanting to make an impression, genuine person with healthy principles. Speaking Boccaccio-esque, the expression ‘u pilu, recently returned to the limelight because it was mentioned in a successful movie that made it very well-known. Besides, Itis also used to expressly indicate that wonderful mountain of Venus to which desire has always tended. 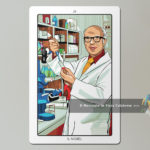 28bis. IL NOBEL (The Nobel Prize)
A character freely inspired by the scientist Renato Dulbecco from Catanzaro (1914-2012). At a young age the death of his friend Peppino instills in him the realization of the powerlessness of medicine regarding certain diseases and it influences his choices about his future career. He was only 16 years old when he enrolled in the Faculty of Medicine at the University of Turin, where he established a fruitful friendship with Rita Levi Montalcini. When Italy came under the control of the German Army he joined the Resistance partisans to offer his professionalism as a doctor. In 1947 he left Italy for the United States and his scientific research led him to discover the mechanism of action of cancer viruses in animal cells, a discovery for which he was awarded the Nobel Prize for medicine in 1975. Determined and never satisfied with knowledge, he compared his work as a researcher to the bow of a ship capable of breaking the sea of ignorance.

This website uses cookies to improve your experience while you navigate through the website. Out of these cookies, the cookies that are categorized as necessary are stored on your browser as they are essential for the working of basic functionalities of the website. We also use third-party cookies that help us analyze and understand how you use this website. These cookies will be stored in your browser only with your consent. You also have the option to opt-out of these cookies. But opting out of some of these cookies may have an effect on your browsing experience.
Necessary Always Enabled
Necessary cookies are absolutely essential for the website to function properly. This category only includes cookies that ensures basic functionalities and security features of the website. These cookies do not store any personal information.
Non-necessary
Any cookies that may not be particularly necessary for the website to function and is used specifically to collect user personal data via analytics, ads, other embedded contents are termed as non-necessary cookies. It is mandatory to procure user consent prior to running these cookies on your website.
SAVE & ACCEPT