Calabria is where the Calabrians are.

The Exhibition
Il Mercante in Fiera Calabrese has an itinerant spirit, loves to know and to be known. Working on commission  basis by public institutions or private bodies, he organizes events with site-specific installations hosting the complete Series of 40 illustrations printed in giant version, including  art direction and press office. The aim is to bring to every latitude the culture of a land able to mix, during its millenary history, the most fruitful contamination living on the Mediterranean Sea. And just like the waves of that sea so much ours, “Il Mercante” is constantly moving!

The video was shot during the exhibition “Il Mercante in Fiera Calabrese di Luca Viapiana”, curated by Stefano Morelli, opening of the project accomplished thanks to Zatita Production and first step of a long journey. Directed by Marco Scarpino. 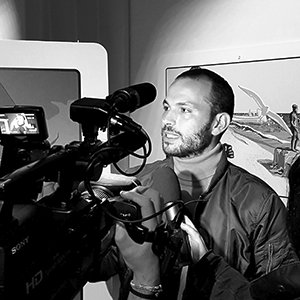 Since long ago Luca Viapiana, concentrated in his study that looks at Catanzaro, embracing it all, carries out a singular and solitary research, developing an analytical approach in the description of the material and spiritual object. Painter, illustrator and director, born in Catanzaro in 1977 and quadriplegic since 2002, Luca describes in his works a waiting world, suspended in the moment of immanence. Whether it’s the intense paintings, made with figurative fury using tax receipts, or the anagrams made in an evocative key with posters, or the playing cards series through which describes the emotional geography of his territory, in all his works Luca seems to freeze the moment before something happens. It’s a joy yet to explode, it’s a wait yet to end, a meeting yet to come true, it is the discovery of a new, unfinished, indefinite value.

Already in 2014, after intense years of study, it gives the regional capital a first surprising series of illustrations with which he describes and catalogues the emotional, landscape and anthropological peculiarities that make up the identity of every citizen of Catanzaro. They ranged from the bursting Minnuta (woman with the prosperous breasts) that advances innocently and provocatively in red dress through the streets of the city centre, capting the indelicate glances of passers-by, to the vibrant landscape of the Morandi bridge that cuts through the sky and connect the hills. Forty images, or rather visions, collected in a box of playing cards, Il Mercante in Fiera Catanzarese has been published by Dal Negro and produced by Zatita Production. A challenge, the 2014 one, that today Luca Viapiana revamps by raising the stakes as it’s done in the famous card game, no longer documenting the delimited and defined city image but facing the broader and more fragmented regional identity with Il Mercante in Fiera Calabrese. And he does so with the spirit of the poet and the scientist, cataloguing and dreaming, vivisecting our region in search of what, in a territory far from everything and first of all from itself, brings us closer to each other, as well as to something in which we can recognize ourselves no longer as individual but as a community. It’s a consideration on identity, on an identity that probably doesn’t exist, or rather, did not exist. And so, choosing cards randomly, we do a journey that is first of all a journey within ourselves, during which we meet the symbols, characters and traditions that together constitute the uniqueness of Calabria. But nothing is concluded, nothing defined, as in a system of Chinese boxes each subject recalls others in an exponential indeterminateness that gives back the variety, often untied and contrasting, of a region that ignores its own treasure.

Often starting from a photographic basis, for which he sets up complex studios, he then moves on to an ink sketch and then to the computerized graphic tables which, compared to Il Mercante in Fiera Catanzarese, are enriched by a tripled chromatic palette that allows him to manage the depths with calmness. The unprecedented presence of the acid tones of purple and green give efficacy to the fragrant harshness of The Onion or the cheeky elegance of Gianni Versace who looks at us melancholy from his villa in Miami Beach, because Calabria is where the calabrians are. The contour, lightened compared to the previous series, contributes to make the image iconic but not static, relating it to the neo-Byzantine tradition of regional history while maintaining an undeniable Pop lightness.

We notice some lacks, gaps that every synthesis cannot but produce, such as liquorice or provola (typical cheese), elements certainly important but victims of a refined balance between geographical location and subjects choice. We don’t find Mia Martini, to whom was preferred the bursting sister Loredana Bertè, The Queen, portrayed in a provocative bare-breasted pose inspired by one of hers Playboy magazine covers. In the background, from behind, a tireless bagnarota, the woman from Bagnara, a mythical figure devoted to the transport of swordfish and materials capable of carrying on her shoulders the weight of the entire community, describes an intrinsic duality to the region where tradition and revolution live together without looking at each other. And so La Pala (wind turbine), a new element that will characterize the future of the landscape, we do not know whether as a scar or a playful totem. In any case, we hope that the podolic cow will keep on to graze under it indifferently.

And by keeping on travelling we continue to ask ourselves: What’s the identity of our land? Is there a common nature, a system of images, traditions and ideas in which to recognize ourselves, on which to base our being? Luca doesn’t solve the question but with the excuse of the deck of playing cards he finds images that are like memories of a dream.

This website uses cookies to improve your experience while you navigate through the website. Out of these cookies, the cookies that are categorized as necessary are stored on your browser as they are essential for the working of basic functionalities of the website. We also use third-party cookies that help us analyze and understand how you use this website. These cookies will be stored in your browser only with your consent. You also have the option to opt-out of these cookies. But opting out of some of these cookies may have an effect on your browsing experience.
Necessary Always Enabled
Necessary cookies are absolutely essential for the website to function properly. This category only includes cookies that ensures basic functionalities and security features of the website. These cookies do not store any personal information.
Non-necessary
Any cookies that may not be particularly necessary for the website to function and is used specifically to collect user personal data via analytics, ads, other embedded contents are termed as non-necessary cookies. It is mandatory to procure user consent prior to running these cookies on your website.
SAVE & ACCEPT